Okay, so the good news is that when it comes to energy costs, driving an EV is way cheaper than driving an ICE. In my case, replacing three ICE vehicles with two BEVs and a PHEV is saving me about $400 every month in gas. The bad news is that charging up isn't free... yet. Most of my charging is done at home, and I have yet to go solar, so for now Southern California Edison is reaping the benefits of my vehicle choices.

Fortunately, SCE offers a few choices as far as rate plans... stay with the current residential rates, go with a time-of-use plan, or dig deep into my pockets ($2000 or so) to install a separate meter for the EVs and enjoy the lowest rate possible on my charging sessions at any time of day. After bringing home my first EV almost two years ago, a Focus Electric, I did a quick back-of-the-envelope calculation and tried out SCE's EV rate assistant tool, then switched to the time-of-use rate plan, figuring I'd never have a reason to charge during peak rate hours. 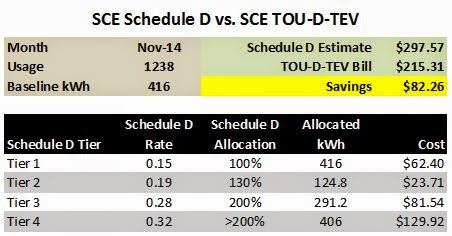 Twenty-two months and two additional EVs later, the TOU plan still seems to be the most cost-effective plan for me. To this day, I've never had to plug in between 10am and 6pm on a weekday, and most charging is done during the super-off-peak hours of 12am-6am. Based on my November bill for 1238kWh used in October, the TOU plan saved me over $80 when compared to residential rate plan.

I'd save even more if I could do all of my charging at the super-off-peak rate, which would be entirely possible if I had just one L2 EVSE. Right now I'm running with two L1 EVSEs on any given evening. Swapping out one of those L1 units with an L2 would enable me to fully charge the FFE or the Volt in less than 6 hours, after using 10kWh to 12kWh of energy on the homeward bound leg of my daily commute.

On a typical weekday, our electricity consumption look like this... about 3.5kW to 5 kW every hour during super-off-peak times, and less than 0.5 kW per hour on average during prime time. The off-peak usage at the 6am-7am and 11pm-12pm hours are higher due to charging of one of the commuter cars; the RAV4 EV is typically charging 12am-6am since it's typically only used close to home during the week.

Our heaviest daily consumption occurs when the RAV4 EV is needed to run errands out of the Valley or clear across town; on those days our consumption during off-peak is much higher since I have to start charging it at about 9pm instead of midnight to replenish as much of the charge as possible and as cheaply as possible before the weekend starts, which is when we usually go on longer treks with the RAV4. 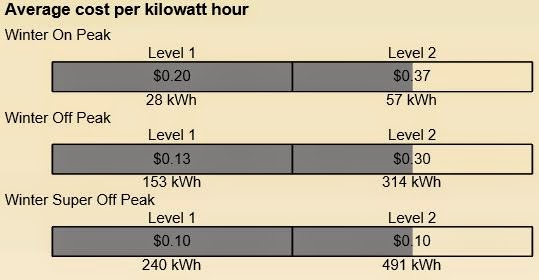 Hopefully in the next month or two I'll finally have a L2 EVSE. I've signed up for the submetering pilot program that comes with a free Juicebox. When that happens, all of my charging should happen between 12am and 6am.

If you're staring at the graphs and checking my math, you're probably wondering... if I'm only running two L1 EVSEs, why is the consumption peaking at well over 4kW at night? Well, the extra 1 to 2 kW is from running a pool pump. Since we're on a time-of-use plan, I've reprogrammed the pool pump to run between 12am and 6am only. We've also moved other activity to late night, such as running the dishwasher.

So... is time-of-use right for you? Well, if your on-peak usage is already minimal, or if you can move a good chunk of your current on-peak consumption to the off-peak times, and you have no need to charge up during on-peak hours, then yes, the TOU plan is probably your best bet. Check out your daily usage profile online, and if it bathtubs like mine does on the weekdays, I'd say go for it.

Here in NJ the utility charges $10 per month for a TOU meter, which would more than offset my projected savings. I have solar and a Nissan Leaf.