Are you one of those gifted types that can freehand a long, level, straight line with one smooth effortless stroke of a paintbrush? Not me. Far from it. In fact, I need all the help I can get to keep things straight around here. So when it came to adorning each of our EVs with California HOV stickers, I had to resort to tricks that I learned through net wisdom and from a couple of friends that are graphic artists.

Here's how the stickers arrive in the mail. One long strip. They also came with the some official paperwork to stuff in the glove box in case you are pulled over and need to prove that those stickers are assigned to your car. Installation instructions are also provided, but they only tell you where the big ones go and where the little ones go, sort of. No tips on how to stick them on straight.

If you're one of those gifted types, this is not an issue since you can probably just peel each of those stickers off the strip and slap them onto the car one after another, perfectly placed and aligned, creating an exact replica of the ideal world you visualized in your mind. However, if you're just a regular Joe like me, that strategy might not work out so well. Instead, you might want to try a method that allows for dry runs and includes visual aids while permanently affixing the stickers to the pristine finish or your new ride.

First off, get a pair of scissors and cut off the backing around each sticker. Perfection is not required, so leave enough margin while cutting around the curve so that you don't accidentally slice into the decal in the event something unexpected happens, i.e. you sneeze, the phone rings, maybe your kid bumps into you, a magnitude 6.6 earthquake hits.... you never know. But try to keep the cuts straight on the straight edges; you'll need those edges to line things up on the car.

Next, figure out where in general you want to stick those puppies and clean the areas. Some folks wax the areas to make it easier to remove when the HOV privilege expires or is revoked; I didn't. Too lazy. I just used Windex.

Now stick a couple of pieces of painter's tape on the back of the decals, rolled over itself so you can hang it on the car temporarily. I just used two pieces. If you are going around a curve, like on the sides of the rear bumper on a Fiat 500e, you might want to use more tape. Don't use garden variety masking tape, transparent tape, or duct tape. Use painter's tape. Other stuff is too sticky for me, and tends to leave adhesive residue on the car unless you wax the area first. Even then, it's harder to work with. 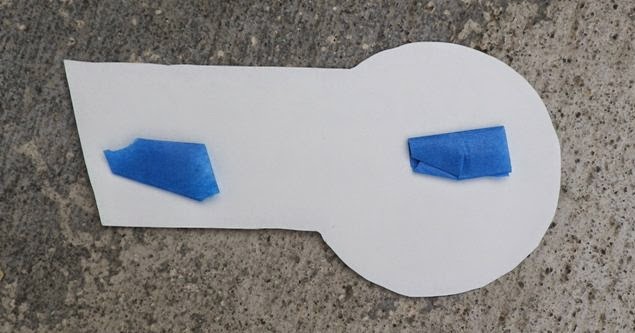 Okay, so after that, just slap the entire assembly on the car and move it around until you're happy with the way it looks. You can try lining it up with character lines, trim pieces, or some other feature on the body or bumper. Or you can use a laser level to line it up parallel the surface of the Earth... just make sure you're parked on a level surface. The point is that you can try out multiple positions and angles before committing.

After you've temporarily hung it on your car exactly where you want it, stick pieces of painter's tape along the straight edges of the sticker. The tape will serve as a guide when you're ready to permanently affix the sticker. 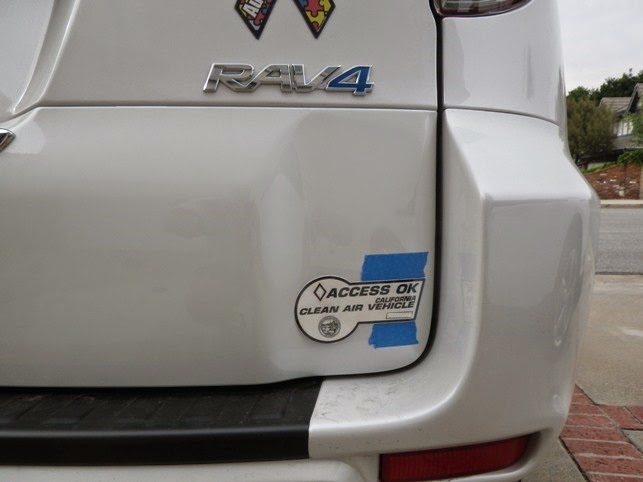 For the rear sticker, I used two pieces of tape as a guide. The right edges of each piece were used to line up the right corners of the sticker. It looks a little crooked here... I didn't use a laser level to line it up. I just eyeballed it (doh!). I also didn't step back 20 feet or so to see what it looked like from a distance before proceeding. However, installing the guides did help reveal the misalignment and I ended up straightening it out a little before committing. 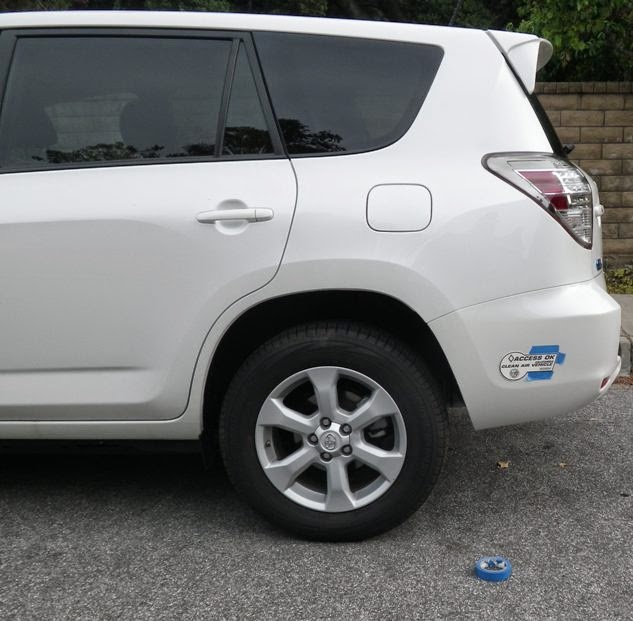 For the side stickers, I used three pieces of tape as a guide. Prior to installing the guide, I used a laser level against the top straight edge of the sticker to level it with the surface of our planet. I first tried out having the sticker lined up with the lower crease on the bumper, but I didn't like the way it looked. So I just took it off and tried again, but used the level. Then I walked across the street and studied it for a moment from various angles to make sure I really got it straight, then framed the sticker with the painter's tape.

After all that, it was time to commit... I took the sticker off the car, removed the backing, and carefully lined up the corners and edges of the sticker with the pieces of tape, working the sticker's adhesive onto the car from the top corner, then across the top straight edge and straight side, and then diagonally across the rest of the sticker, trying not to form any bubbles. Finally, I removed the pieces of tape and stepped back to see if I screwed up or got lucky. Fortunately I got lucky, for the most part. Even the rear sticker came out okay; initially I thought it would look lame. But after parking it on the street later on to do the side stickers and staring at it from a couple of car lengths away, it looked pretty straight. Better lucky than good, right? 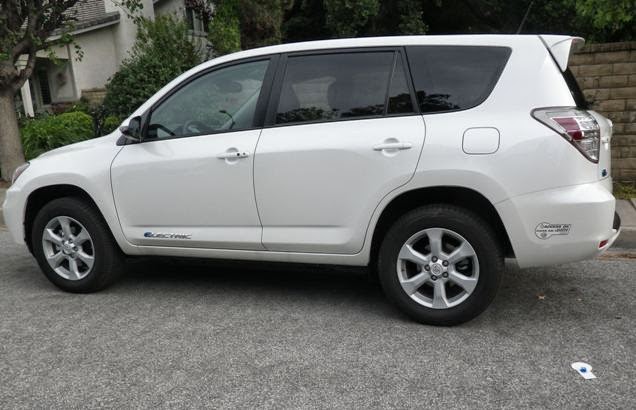 I think it took me about a half hour total to install all three stickers, including the time to trim the backing and take some pictures. Which to me was time well spent since I've seen way too many sticker installs while on the road and at charging stations that were so randomly misaligned and out of place that I couldn't help gawking at it, like staring a train wreck. I couldn't help looking and thinking, "How the heck did that happen?".

To the right are some photos of HOV stickers on our Volt and Focus Electric, for your consideration, in case you're like me and are prone to wasting way too much time trying to decide where to put the stickers before spending the short 30 minutes to install them. Sometimes seeing what others have done can help you quickly decide what you like. Or don't like.

For the Volt, I tried to line up the stickers with the lower valance all around. It looks okay, but my first choice was to stick them on the valance itself, at least for the side and rear stickers. I opted against it in case I felt the urge to Plasti-dip the valance for a monochrome look. In retrospect, even though I won't be painting the valance after all, I'm glad I didn't install them down there because I've seen a few Volts with their stickers peeling off of the textured black plastic.

On the Focus Electric, I went with how WattsUp, one of the prominent contributors to myfocuselectric.com, adorned his FFE with HOV decals. They're all level with the ground, and the side stickers wrap over the start of a character line that sweeps across the bumper. I thought it looked great on his car, so I followed suit. 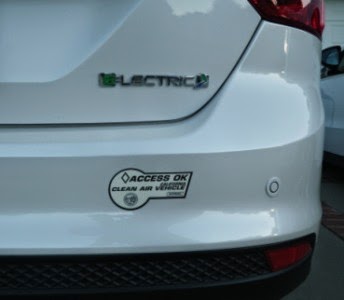