Okay, I think I'm done. I guess I have to be, since I've already hit the "Place your order" button. It's about time, after countless hours online looking for the best deal on Low Rolling Resistance tires for our RAV4 EV.

One thing I knew for sure right off is that I won't be getting the original equipment Yokohama Geolander G91 POS tires that the car came with. Stay away from these. They were down near the wear bars last June, in less than 25K miles, which really ticked me off. What car company in their right mind sticks tires with a tread wear rating of 200 on a vehicle that's not even remotely targeted for weekend racers? And with such a presumably sticky compound, why did they still squeal like a pig (two pigs, actually, the front ones) when asked to take a corner with the slightest bit of throttle? And as crappy as they are, why did the dealer quote over $200/tire last summer?

Surprisingly, I managed to eke another 8K miles out of them (less driving in Sport mode), but they're well past the wear bars and it's been a wet winter by So Cal standards. Thus, I figured it's high time to chuck the Yokohamas and install fuel-efficient tires that might go twice as far, or at least have double the tread wear rating (400+).

Why LRR tires? Well, based on various reports/articles by Tire Rack, Alternative Fuels Data Center, Consumer Reports, and others, it seems to me that settling on non-LRR tires could reduce an EV's range by 3% or perhaps more. On a 100-mile EV, a few miles of range degradation is hard to ignore, particularly when home is a few miles away while unexpectedly running near empty. Besides, after quickly looking at all the 225/65R17 tires out there, it seems that tires marketed as LRR/fuel-efficient/green/energy-saving/etc don't cost more than ones that are not. 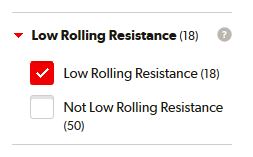 So what's out there? Unfortunately, you can't just Google "LRR tires" or something like that and immediately get a comprehensive, up-to-date list that you can work with. What you do get are links to a lot of great info on fuel-efficient  tires in general from sources such as Edmunds, HybridCars.com, and of course Tire Rack. There are a number of lists on various forum posts and on Tire Rack's write-up, mostly circa 2012-2014, but the data is old, not to mention incomplete or if recent, piecemeal.

After doing some digging and sifting, I found that the best list of available LRR tires is from TireRack.com... just shop for your tire size or vehicle, then click on the "Low Rolling Resistance" filter. For the RAV4 EV, there are 17 choices. For the Gen 1 Volt (215/55R17), there are also 17 choices, some of which are not the RAV4 EV list. For a LEAF S and Prius Plug-in base model, there are over 20 all-season choices and a handful of summer tires. I also checked Discount Tire Direct, which included LRR tires from Goodyear and Road Hugger.

A union of these choices gives us a pretty comprehensive list of what's out there. Note that most tire manufacturers have a cute designation for boasting products with low rolling resistance, which makes it easier for us to spot fuel-efficient options a crowded replacement tire market.

Low Rolling Resistance Tires, January 2017
NOTE: For tires available in more than one speed rating, treadwear and warranty info is for H-rated tire


If you are among the 78% of consumers that buy your tires from the first person that says you need them, i.e. from your car dealership after performing periodic maintenance, or perhaps from the local tire shop that offers free rotations or a quick flat repair, I suggest you verify that they are recommending a tire that won't degrade your electric vehicle's range. Perhaps show them this list (or better yet, show them Tire Rack's LRR selections for your EV so they can try to match the price) and see what they are willing to do.

As for me, I'm not part of that 78% majority. I'm obsessive-compulsive when it comes to buying stuff if it costs over, say, about four bucks. So I did the research on RAV4 EV tire replacement by poring over recommendations posted on various EV forums and reading reviews on Tire Rack. Here's how it laid out:

Initially I was set on Bridgestone Ecopias, thanks to RAV4 EV forum posts, recent reviews and posts elsewhere, and a $70 coupon at Costco. Unfortunately I forgot that coupon expired on Christmas day, so when I finally took the time to order the tires on 12/27, Ecopias were no longer a great deal at under $500 installed. Costco switched to offering $70 off on Michelins instead, so I started looking at Michelins and other brands.

I considered the Firestones since Tire Rack had them for well under $100 each. I figured they should be okay since they're the same company as Bridgestone. But after adding a $77 charge to ship four tires from Tire Rack's Nevada warehouse to California, the out-the-door price for the Firestones was $40 higher than Costco's deal on Michelins.

I wasn't considering the Kumho until it popped up for a killer price at Wal-Mart. I think they're OEM on Hyundai crossovers and on Durangos, so how bad could they possibly be? Well, after reading recent reviews, I was turned off, despite the $100 out-the-door price advantage.

Based on the table above, I was ready to order the Michelin Latitude Tour tires from Costco.  But then just for kicks I decided to see if the tires are sold on Amazon. Well, they are. Used ones too, in fact, in various states of wear. There are a couple of  highly rated vendors back East that seem to sell a lot of used tires on Amazon and eBay, and one of them had three Latitude Tour tires with 7/32"-8/32" of tread left, one with 8/32"-9/32"left. New ones start with a 10/32" tread depth, and tires are considered worn at 2/32". So these used tires should have about 63% to 75% of tread life left. A new Latitude Tour comes with a 65000 mile warranty, which implies that these used ones should be good for at least 40000 miles. Price is about $189 for all four, and shipping is free. A local tire shop will install four tires on rims with TPMS for $63, so my out-the-door cost should be about $252, which is less than half the Costco deal for new Michelins. 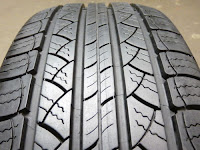 Normally I'd opt for the new tires, but the lease on the RAV4 EV is up in February and I'm no longer planning on buying it at termination... my wife is really pushing for the Chrysler Pacifica Hybrid plug-in due out in spring, so the new plan is to extend the RAV4 lease month-to-month until I can swing a decent lease deal on the minivan. At most I will put 9000 more miles on the RAV4,  the used Michelins will have plenty of life left after I'm done with them.

Amazon says I should expect them here in about a week. I'll let you know how it goes.

You are welcome! Glad to hear you're having fun with your Spark EV! Interesting that the tires on the Spark EV are staggered. Never heard of that on a front-drive car. Did you lease? If so, you might want to consider used tires... I didn't report on it back yet, but I'm having a great time with the used tires I got for the RAV4 EV. I'm almost thinking of keeping the RAV4 because it's a different beast with the better tires. Much quieter and smoother, lots of grip. No efficiency hit noticed so far (800 miles).

They are staggered on the Fiat 500e as well, an inch wider in the back. I'm thinking I'm going to move to a wider tire so I can go back to my favorite Michelin's which are not available in the stock width.

Your plan sounds like a good one for your situation and climate but it is worthwhile to now that tyre braking distance goes up fast below 5 mm tread. So while I am also frugal I view tyres as cheap insurance. If you do not mind a slightly less soft ride, a slightly harder compound and tyre inflation to close to sidewall maximum does wonders for long life. I get close to 100k miles out of my tyres (down to 5 mm), although admittedly mostly highway driving.

Actually, the wheels are staggered on the 500e. The tires are the same size.