Yup, it's been just about two years, so we're ripe for a sequel.

Way back in the fall of 2013, I went on a senseless rant called "Trunk Wars", retaliating against the repeated implications made by self-proclaimed experts that battery intrusion reduced the trunk of the ICE-based Focus Electric to miniscule, useless proportions. However, armed with facts and data from manufacturer web sites, it was easy to show that the Focus Electric actually had the second-largest trunk of all the affordable pure electric 4-door cars on the market at the time.  And at 14.5 cu ft of available space back there, its trunk was actually larger than a number of compact-class ICE sedans.

Well, that was then, this is now. A lot has changed in two years.  Today, in 2015, there are almost twice as many affordable 4-door pure electric cars on the market compared to 2013, and as expected, most of the new kids on the block have bigger boots. In fact, three of the four new models provide much more cargo space behind the rear seats than the Focus Electric, which is now ranked fifth in the current field of eight. Moreover, these three newcomers provide a flat floor, rendering battery intrusion, if any, invisible to the naked eye. So for those of you obsessed with having a voluminous rear on an EV that won't cost you an arm and a leg, you now have more than just the LEAF to look at. Take a peek behind the e-Golf, Soul EV and B-Class ED.

Need even more space for your stuff? Gonna have to give up that arm and leg for a Model S. If you're willing and able do that, might as well throw in a left nut for that P85D so you can really haul ass.

Willing to consider pre-owned? How about a used 2012-2014 RAV4 EV? At 38.2 cu ft behind the rear seats, none of the 2015 offerings come close to the capacity and versatility of this cute-ute's cargo space.

Interestingly, what hasn't changed in the past two years is the cargo space provided in 4-door ICE sedans that are potential competition to today's affordable BEVs. In that respect, the Focus Electric's cargo capacity is still on par with popular cars such as the Civic, Corolla, Mercedes CLA, and BMW 3-series, all with about 13 cu ft of trunk space. 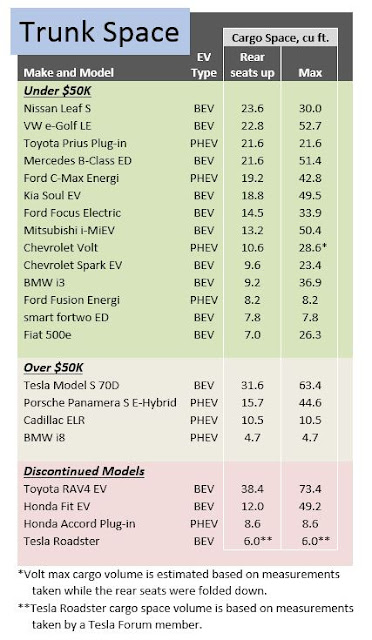 However, with rear seats down, the e-Golf trumps its competition with a whopping maximum of 52.7 cu ft, then the B-Class ED nearly matches it at 51.4 cu ft.  Mitsubishi's i-MiEV and Kia's Soul EV round out the top, both with about 50 cu ft back there.

Now here's a curiosity... am I seeing things, or are there now a couple of BEV "conversions" on the market that match the cargo capacity of  a BEV built on a dedicated platform?  Looks to me like the space behind the rear seats of the e-Golf and B-Class ED are within 10% of the LEAF. Even more surprisingly, particularly to those who still preach superiority of dedicated BEV platforms over shared platforms, is that the max cargo space of the LEAF is over 20 cu ft smaller than the e-Golf and B-Class ED.

So now I'm wondering... what again is the advantage of a dedicated BEV platform?  It just doesn't seem like it's "All About That Bass" anymore...