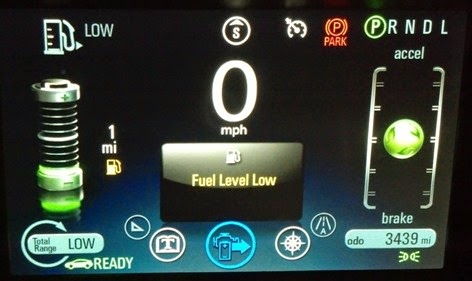 It took a while, almost four months and over 3400 miles, but it finally happened... the low fuel light came on in the Volt. Just prior to the warning, the dash indicated that I still had 37 miles of gas range left, so for the most part I've been ignoring the warning the last couple of weeks. I've only needed maybe two to seven miles of non-EV driving every time I drove home from work on a full charge, so I figured I'd use up as much of the old gas as possible before filling up, and perhaps wait for gas prices to start dropping.

I could have gone another couple of weeks, but I ended up stopping at a local Shell station last week to use the opportunity to get my eleven-year-old kid to pump gas for me. It's about time he starts earning his keep around here. He's expensive... when we go to Carl's Jr or Jack-in-the-Box after his weeknight baseball games, the boy orders something that has at least two beef patties, multiple strips of bacon, and a couple of slices of cheese, usually about five bucks or more, and I order two tacos for 99 cents. Oh, and he has to have fries too, and that's another buck.

"Ya know, for less than six bucks, Jolt will take me all the way to work and back. That's like 80 miles. So, after you eat that burger and fries, are you gonna carry me 80 miles so we can give Jolt a rest?" I asked, as we wait at the drive-thru window for his exquisite cuisine to be meticulously prepared.

"Nope," he responded, staring out the windshield at nothing in particular.

"Okay, how about one-way, just to work? It's downhill."

"Uh, no..." he replied, still staring straight ahead.

"Fine." I conceded. He smirked as he turned his eyes toward me. He's starting to get the hang of my warped sense of humor. It was more fun when he took such requests seriously, but I guess we all have to grow up sometime. He's still into Marvel superheroes and Transformers, which is why our Volt is named "Ghost of Jolt", or just "Jolt". He really wanted us to get a blue one, a replica of the Volt-based Autobot in "Transformers: Revenge of the Fallen". However he knew that my obsession with white cars was unbreakable, so he didn't argue. Despite getting the wrong color, Jolt is still his favorite vehicle in the family fleet.

So I figured he wouldn't mind pumping gas for Jolt. In fact, he was pretty excited about it. We were on the way back from school after dropping off his science project, titled "At Which Angle Does a NERF Gun Shoot the Farthest?" (45 degrees, in case you're wondering). The Shell station was halfway between school and home, which presented a perfect opportunity to train the boy. But there were problems. The gas door wouldn't open, despite repeated attempts at punching the button and the dash indicating that Jolt was ready for refueling.

"Are you sure it goes here?" asked my beloved son, pointing at the Jolt's right rear quarter. He did something back there and then yelled, "Okay I got it!". By now a couple of folks were staring with curiosity. I nonchalantly got out of the car and walked over to the pump, where I slid my credit card and had him select "V-Power" and grab the nozzle. He stuck it in Jolt's filler and pulled the trigger, but the pump clicked off immediately. "Let go of the trigger and pull it again," I advised him. He did this a number of times, but the pump would just click. Click, click, click... like a six-shooter fresh out of bullets. "Let me try," I said, and he moved aside.

I shoved the nozzle farther into the filler, fighting against the vapor recovery sleeve all the way. Although not visible, I'm thinking that they used a spring from a coilover shock made for offroad vehicles to guarantee that this damn sleeve seats against the filler so tight that not one single molecule of noxious vapor escapes into the atmosphere. I pull the trigger a few times, the pump still clicks off.

"Are you sure it goes here?" he asked, again.

I sighed. "Yes," I replied, but I don't think he believed me.

By now, the same people that were staring looked more curious and actually seemed a tad bit concerned. Others started to notice our battle with the nozzle. I was afraid that a crowd would soon form and someone with an iPhone would post the whole ordeal and go viral. Some were probably wondering if we'd all be blown to smithereens in a few seconds as this clueless idiot with an electric car pumps 91-octane into a charge port that's expecting 240 volts. I actually doubted myself for a moment when my son questioned my judgement. Fortunately after finding the perfect angle, I got the pump to actually do some pumping. I let my son take over, but he didn't have the strength to fight the vapor recovery sleeve for very long. So I had to finish the job as he watched the display and asked him tell me when we were close to eight gallons. I didn't trust the pump to stop automatically when the tank was full since we were constantly fighting it and it was still clicking off every so often, even at the right angle and at a slower flow. At just short of eight gallons we declared victory, so my son capped the filler and shut the gas door as I hung the nozzle back on the pump.

"Yeah," he responded, chuckling as he smirked. "Thanks, Dad. I love you."